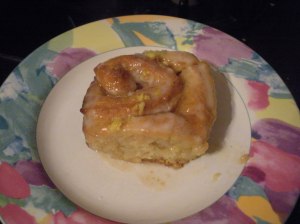 I’ve had this recipe bookmarked for about as long as I can remember (not saying much), but always figured I’d make regular cinnamon rolls first. That still hasn’t happened, although I did at one point make Peabody’s Cinnamon Roll Cheesecake, but it was definitely time to get on this recipe. They were gooey, sticky, basically everything you could want in a breakfast, and the recipe can be mostly done the night before.

Start off by zesting your 3 lemons and juicing them. You’re going to want 3 portions of zest later, so you might as well keep them separate as you zest them, but the juice can all go in one cup. 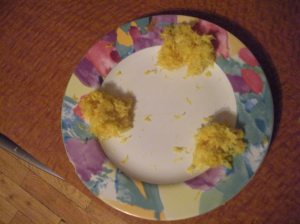 In a large bowl, sprinkle yeast over your warmed milk and let it sit while you grab the next several ingredients. Stir in the butter, sugar, vanilla, and one cup of the flour. Then add the salt, nutmeg, and one of the zest piles. 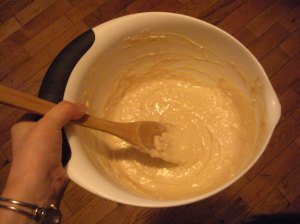 Someday I'll have a Kitchenaid. Not today, though...

Stir in the eggs and enough of the remaining flour to make a soft yet sticky dough. For me that was about 4 cups total.

Turn the dough out to a lightly floured surface and knead 5-7 minutes, until smooth and pliable. Place the dough in a greased bowl, rotating so that it gets greased on all sides. Cover with plastic wrap and let rise until nearly doubled, about an hour.

In the last 5 minutes of that hour, make the filling. Begin by mixing together sugar, nutmeg, and ginger. Using your fingers, combine the second portion of zest by rubbing it into the sugar mixture until it resembles soft sand. Slowly pour in lemon juice, stirring, until the sugar is a wet, clumpy mixture. This took muchless than half of the lemon juice for me.

It’s then time to assemble the rolls! Start out by greasing a 9X13″ dish. Turn your risen dough out again onto a lightly floured surface and pat/roll it out to a 10X15″ rectangle. The dough will still be thick.

Spread the dough with melted butter, and cover that with the sugar mixture.

Roll the dough up tightly from one of the long sides, keeping the dough taught to prevent leakage.  Cut the roll into 12 slices. Pinch one side of each roll closed, to hold in the filling, and lay them in the pan, pinched side down. Cover the rolls and allow them to rise for an hour, or until nearly doubled. You can refrigerate the rolls at this point for up to a day, just give them an hour to rise the next day between the fridge and the oven. 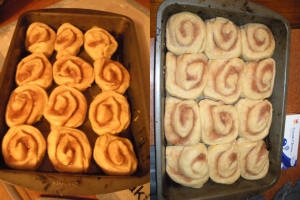 No more gaps by the next day...

Bake the rolls for 35 minutes, during which time you can clean up and make the glaze.

Looking a bit gooey straight out of the oven, pre-glaze.

For the glaze, whip your cream cheese in a food processor, mixer, or blender until light and fluffy. Add lemon juice and blend until well combined. The original recipe says ‘the remaining lemon juice,’ but I found that to be too much – 1/4 cup is probably plenty. Then add the powdered sugar and blend until smooth and creamy.

When the rolls come out of the oven, smear them with the glaze and sprinkle the remaining lemon zest on top. Let cool 10 minutes, and then dig in! 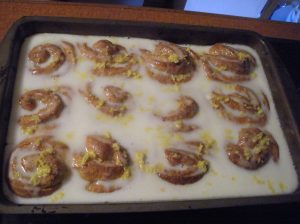 Too much lemon juice made this a bit of a flood, but it solidified over time.

I’m submitting this post to YeastSpotting, a grand place to find baking ideas.


Adapted from The Kitchn

Making the dough:
Zest and juice the lemons, keeping the zest in 3 parts and setting aside the juice for now.

In a large bowl sprinkle the yeast over the warmed milk and let it sit for a few minutes. Stir in the softened butter, sugar, vanilla, and one cup of the flour. Stir in the salt, nutmeg, and one part (1/3) of the lemon zest. Stir in the eggs and enough of the remaining flour to make a soft yet sticky dough. Turn the  dough out onto a lightly floured countertop. Knead for 5 to 7 minutes, or until the dough is smooth, pliable, and stretchy.

Place the dough in a greased bowl, rotating to oil the dough on all sides. Cover the bowl with plastic wrap and a towel and let the dough rise until nearly doubled — about an hour.

Assembling the rolls:
Lightly grease a 13×9 inch baking dish with baking spray or butter. On a floured surface pat the dough out into a large yet still thick rectangle — about 10×15 inches.

Spread the dough evenly with the 3 tablespoons of softened butter, then pour and spread the lemon-sugar mixture over top. Roll the dough up tightly, starting from the top long end. Stretch and pull the dough taut as you roll, to keep the lemon sugar firml inside. Cut the long dough roll into 12 even rolls. Pinch the bottom of each roll closed and place each one, open and cut side up, in the prepared baking dish.

Heat the oven to 350°F. Place the risen rolls in the oven and bake for 35 minutes or until a thermometer inserted into a center roll reads 190°F.

Making the glaze:
While the rolls are baking, prepare the glaze. In a small food processor (or with a mixer, or a sturdy whisk), whip the cream cheese until light and fluffy. Add roughly 1/4 cup of the remaining lemon juice and blend until well combined. Add the powdered sugar and blend until smooth and creamy.

Finish the rolls:
When the rolls are done, smear them with the cream cheese glaze, and sprinkle the final remaining lemon zest over top to garnish. Let cool for at least 10 minutes before serving, but do serve while still warm.

My name's Corinne, and I like cake, cookies, and chocolate! Also, non-c-things such as ponies, Star Trek, and biking. I write a food blog and a blog about life, wide open spaces, and museum work. Nice to meet you!
View all posts by sparecake →
This entry was posted in Breakfast, Brunch and tagged Lemon, Sticky Buns. Bookmark the permalink.