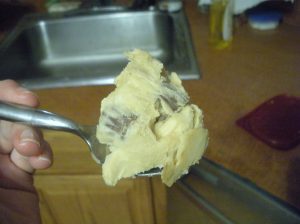 My former roommate Alex and I used to joke that food eaten either standing inside an open fridge door or over the sink while sobbing has no calories. This ice cream is perfect for those situations, which is good as it’s probably not the healthiest thing ever… It’s got mini Reese’s cups, which, it turns out, are smaller than miniature Reese’s cups. Who knew?

To begin, combine milk, cream, peanut butter, and sugar in a medium sauce pan. Bring it to a simmer over medium heat, stirring, until smooth, about a minute after it reaches a simmer. 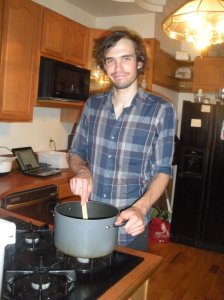 My friend Guy came over and did most of the stirring.

Remove the pot from the heat and stir in the vanilla. Let the mixture cool to room temperature, then put in the fridge for at least 2 hours. 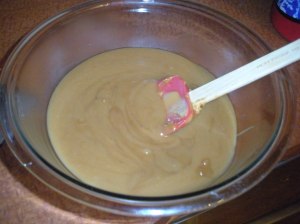 We moved it to a bowl, since the pot was hot. I'm sure that made it cool at least 24 seconds faster...

Once it’s chilled, freeze the mixture in an ice cream maker according to manufacturer’s instructions. 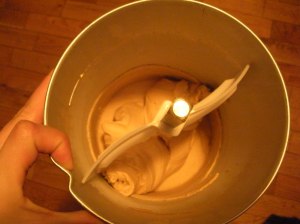 Guy had a kind of old fashioned, but still electric, ice cream maker.

The recipe I followed said to spread half the ice cream in a 2 quart container, top with half of the peanut butter cups, then layer on the second halves and swirl the candy in with a spatula. If your ice cream maker can handle chunky mix-ins, I think you could probably just pour them in and let the machine do the mixing.

Freeze the ice cream in an airtight container for at least 3 hours to make it really firm. 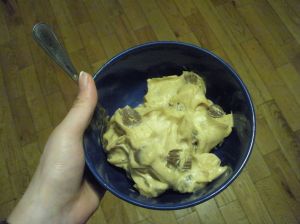 From Culinary Concoctions by Peabody.

In a medium saucepan simmer milk, cream, peanut butter, and sugar over medium heat, stirring, until smooth, about 1 minute.

Remove from heat, stir in vanilla, and cool mixture to room temperature. Then place in fridge to chill for at least 2 hours.

Freeze mixture in an ice-cream maker according to manufacturer’s instructions.

Freeze ice cream in an airtight container for at least 3 hours in order for it to firm up.

My name's Corinne, and I like cake, cookies, and chocolate! Also, non-c-things such as ponies, Star Trek, and biking. I write a food blog and a blog about life, wide open spaces, and museum work. Nice to meet you!
View all posts by sparecake →
This entry was posted in Dessert and tagged Ice Cream, Reese's. Bookmark the permalink.