This recipe is one I copied down from my mom several years ago, but hadn’t made until now. Today’s her birthday, so… Happy Birthday, Mom, I made some food you’re too far away to eat but already know how to make anyway. Wooo?

Looking at this recipe, it’s pretty clear I copied it down before I’d started bothering to keep recipes particularly accurate, since I apparently had to go back later to add in amounts for some of the ingredients. I also didn’t write down to grease the pan, which may or may not have been in the original, but would have been useful.

I went for a package of something along the lines of “mixed large raisins” for variety, which I think is a good move.

Would really never bother with this stuff again. Fine for in recipes, though.

Plump the raisins by leaving 2 cups of raisins in 1 cup of warm water for an hour.

Not how grapes are made.

At the end of the hour, drain the water and pat the raisins dry. Mix them in a medium bowl with the honey, cinnamon, and lemon zest, then set aside.

Combine the flour and brown sugar in a food processor and mix briefly to break up lumps. Add the butter and blend. Transfer to a bowl and stir in the granola and cream and mix until soft and crumbly. 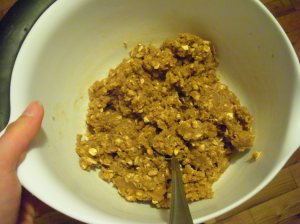 Pat 2/3 of the dough into the bottom and an inch up the sides of a greased 8″ square pan. Add the filling, spreading evenly, and then crumble the remaining dough over the top. Press the crumbles gently into the raisins, and then bake until golden.

Cool to room temp before cutting. This is one time when I’d actually follow that, as it’s pretty fall-apart-y while it’s still warm.

This is nicely fruity, which I suppose is a good change once in a while from the super rich, heavy, chocolate things I have most of the time. It’s also really good with lemon curd ice cream!

Plump the raisins by leaving them to soak in the water for an hour.

Preheat the oven to 350 degrees and grease an 8″ square pan.

Drain the raisins and pat them dry, then put them in a medium bowl. Add the honey, cinnamon, and zest and stir to combine.

Combine the flour and the brown sugar in a food processor and mix to break up lumps. Add the butter pieces and blend. Transfer to a bowl and add the granola and cream. Stir until soft and crumbly.

Pat 2/3 of the dough into the bottom and an inch up the sides of the pan. Spread the filling evenly over the crust, and then crumble the remaining dough over the top of the raisins, pressing it gently into the raisins.

Bake 40 minutes until golden. Cool to room temperature before cutting.

My name's Corinne, and I like cake, cookies, and chocolate! Also, non-c-things such as ponies, Star Trek, and biking. I write a food blog and a blog about life, wide open spaces, and museum work. Nice to meet you!
View all posts by sparecake →
This entry was posted in Dessert and tagged granola, raisins. Bookmark the permalink.