If you didn’t know, the Tour de France ended yesterday! For the 3 weeks, the chefs of 3 of the teams were on twitter sharing photos, menus, and blog posts about what they were making their teams. Check out this sweet kitchen-truck one of them was working in! Last week one of the chefs mentioned that she had made Koldskål for dessert and all the guys had loved it. Not only did I have no idea what it was then, but I still can’t even type it without copying and pasting from somewhere else to get that å business.

Turns out, Koldskål is a chilled Danish buttermilk soup popular in the summer. I made a tiny amount that afternoon to check it out, and it’s real light and refreshing, so I decided to make it for a picnic I went to this weekend. (In the meantime, my mom wanted to get some of those Dunkin Donut oreo donuts so I made some more that evening to dunk the donuts in. Totally reasonable.)

I’ve never had it made by anyone Danish, so I read a bunch of recipes and took what I liked out of them, which included a bit of lemon. The first time I made it I didn’t have any buttermilk around, so curdled milk by adding lemon juice. When I made it later for the picnic, I used store-bought buttermilk, but added some lemon zest to keep the extra tart citrus flavor. This is good with some berries. There are apparently also Danish cookies that are usually paired with it, but until I have any idea what they are, Nilla wafers are a good substitute.

Mine first got packaged up. 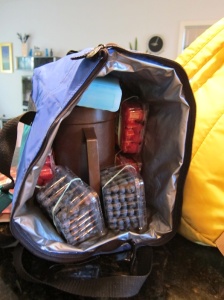 Driven safely upright down to Boston. 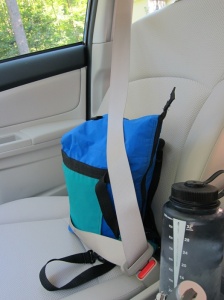 And then chugged at a picnic!

We shared some serious truths.

Super simple, and really nice and light for a hot day. If you’re interested in checking out what cyclists eat, the chefs for Team Sky (my new favorite twitterer), Saxo Bank Tinkoff Bank, and Garmin Sharp are apparently all going to be posting again during the Vuelta a España next month!

Based on a bunch of sites, but especially My Danish Kitchen.

Combine all ingredients and mix well. Serve chilled with berries and/or cookies as desired.

My name's Corinne, and I like cake, cookies, and chocolate! Also, non-c-things such as ponies, Star Trek, and biking. I write a food blog and a blog about life, wide open spaces, and museum work. Nice to meet you!
View all posts by sparecake →
This entry was posted in Dessert, Dinner and tagged Allez Cav, danish, Koldskål, Tour de France, yay bikes. Bookmark the permalink.