Thursday night my friend Anna and I went to this ‘Urban Picnic’ thing at the Textile Museum. It was a fairly DC event – 20-somethings finding any excuse to drink outside while still feeling cultured because they’re at a museum! After getting our pictures taken throwing some fabric leaves, making fun of the hugely pretentious descriptions of all the exhibits, and hanging out on picnic blankets for a while, we talked to a guy selling goat cheese made in Maryland.

We'd just biked across town and up a hill in 101 degree heat. The fact we were standing, rather than puddling, is a feat in and of itself.

I’d been thinking about making olive bread for a while, and getting some goat cheese was the final motivator.  If you weren’t aware…this is good combo. Even if you’re too lazy to make the bread, next weekend you could probably get both items at a farmers market, and it’d be worth your while.

This bread starts with, appropriately enough, a starter. Combine water and yeast in a medium mixing bowl and stir to dissolve the yeast. Add the flour and stir until fully incorporated. Cover with a cloth and leave to ferment at room temperature for half an hour. I nearly put this in just a regular cereal bowl sized bowl…don’t do it, the starter gets too big for that. 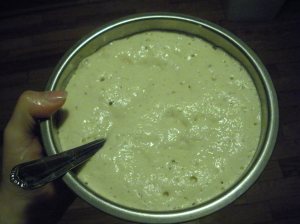 After half an hour, it's pretty big.

At the end of the half an hour, in a large bowl combine water, honey, and yeast. Again, stir to dissolve the yeast. Add all the remaining ingredients, including the risen starter. Stir as well as you can in the bowl, and then turn out on a clean surface and knead until the dough is well mixed and holds together well. Don’t think that you should keep the olives out until towards the end – they hold together better than you might think, plus the bit of moisture that is squeezed out of them adds flavor to the dough and helps moisten it.

Divide the dough in half, and roll each half into a smooth ball. Cover with a warm, damp cloth (or paper towel if all your kitchen towels happen to be in the dryer at that moment…) and let rise for half an hour.

This dough comes together pretty quickly. 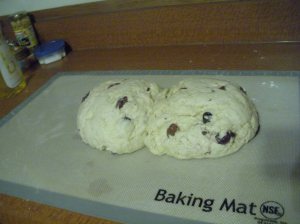 Oops, comes together quite litterally if you let the balls rise too close together!

Transfer your risen dough to sheet pans (or you could have put them there for the rise, it isn’t a big deal), and score the tops 3 times with a sharp knife. 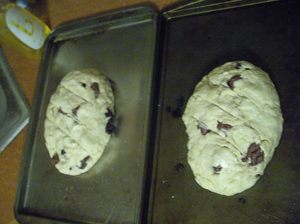 You can see the knife marks in there...

Spray the tops with a bit of water, and bake 30-40 minutes, until deep golden brown or until the middle of the loaves is 190-200 degrees, rotating halfway through. Remove to a cooling rack for half an hour, and enjoy! 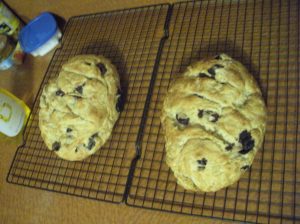 With the sun-dried tomato chevre I got at the Urban Picnic. I've been eating a ton of this in the last 24 hours!

I’ll be submitting this to yeastspotting and Aspiring Bakers, where the theme this month is (still) Bread Seduction, hosted by The Sweetylicious.

To make the starter, combine the water and yeast in a medium mixing bowl. Stir to dissolve the yeast fully. Add the flour to the bowl and stir until the ingredients are fully incorporated. Cover with a cloth and ferment the starter at room temperature for 30 minutes.

For the dough, combine the water, honey and yeast in the bowl of a stand mixer. Stir to dissolve the yeast fully. Add the remaining ingredients and stir to combine. Turn out onto a clean surface and knead until the dough is evenly incorporated, other than the olives, which should remain mostly whole. Divide the dough into two even pieces and roll each piece of dough into a smooth ball. Place the dough on the counter or in a proofing basket and cover with a warm, damp cloth to rest at room temperature for 30 minutes.Preheat the oven to 400 degrees. Transfer the dough to two pans and score each 3 times with a sharp knife. Spray the tops with water and bake 30-40 minutes, until the crusts are a deep golden brown and the middle of the loaves is 190-200 degrees. Halfway through, rotate the breads, both spinning them around and swapping shelves that they are on.Remove the bread from the oven and place it on the cooling rack for 30 minutes. Enjoy!

My name's Corinne, and I like cake, cookies, and chocolate! Also, non-c-things such as ponies, Star Trek, and biking. I write a food blog and a blog about life, wide open spaces, and museum work. Nice to meet you!
View all posts by sparecake →
This entry was posted in Bread and tagged Bread, olives. Bookmark the permalink.