At some point last year I was helping a friend find cookout-friendly recipes, and stumbled across a whole page of cookout desserts. This was the one I was most interested in, and I made it ages ago, but always thought it would be better with more meringue. I made it again this week with double the meringue, which was possibly overkill, but this stuff is good! Also, I swapped out some nuts in favor of milk chocolate chips, but…I always do that.

This starts off with just a basic shortbread, that you make by just combining the flour, powdered sugar, and butter with a pastry blender until crumbly. Press the mixture into an ungreased 9X13″ pan and bake.

You could in theory get this flatter by pressing on it with the back of a greased spoon or spatula, but there's not really a point.

While the crust is baking, separate your eggs and beat the whites in a large bowl until frothy. Continue beating and gradually add the brown sugar. Continue beating until soft peaks form when you remove the beater from the mixture. This will probably take longer than it takes for the crust to bake.

When the crust is done, remove it from the oven, but leave the oven on. Immediately pour the white chocolate, and one cup of the milk chocolate (or nuts) over the hot crust. Then get back to beating your egg whites.

Bake for 30-35 minutes, until golden brown and hollow sounding. You can eat it as soon as it’s cool enough to touch, or later once it’s completely cooled. If you keep it covered, it’ll keep for days.

This is a ridiculous thing.

I took mine out of the oven and left it out to cool, fell asleep, and didn’t cover it until the next morning, so it sort of collapsed, but is still delicious. 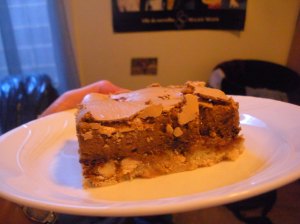 I would definitely bring this to a cookout, if I could figure out a good way to transport it by bike!

Adapted from Serious Eats (approximately 3/4 of the way down the page).

My name's Corinne, and I like cake, cookies, and chocolate! Also, non-c-things such as ponies, Star Trek, and biking. I write a food blog and a blog about life, wide open spaces, and museum work. Nice to meet you!
View all posts by sparecake →
This entry was posted in Dessert and tagged chocolate, Meringue. Bookmark the permalink.