Last February a friend sent me an article about lasagna cupcakes. That idea’s been bouncing around in my head since then, but this week I finally made them. I used this as a reason to make tomato sauce for the first time, and it was really delicious. Simple, but very nice.

An easy way to peel the tomatoes, if you’re using fresh, is to put them in the freezer for several hours, until they’re hard. Thaw the frozen tomatoes in warm water and the skin will peel off pretty easily. If it’s not coming off, and your tomatoes had been frozen firm, then you may just need to let them thaw another few minutes.

I went to the farmers' market for this one.

Once the tomatoes are peeled, but before you start the real cooking parts, put 12 toothpicks in a glass of water to soak, and the peas in a dish on the counter to thaw.

Roughly chop the tomatoes (canned or fresh) into large chunks. Cut the onion in half and peel it. Place the tomatoes (and any juice that you can catch from the chopping), onion, butter, and salt in a saucepan and bring to a slow simmer. 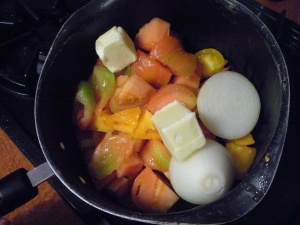 The yellow tomato ends up the one that colors the whole sauce, somehow.

Continue to cook for approximately 45 minutes, or until it’s reached the thickness you like. Taste to see if it needs any more salt, and add if necessary.

The finished sauce - this'd make a fine spaghetti dinner sauce on it's own!

In the meantime, cook the lasagna noodles according to the package directions. While you wait, also cook the chorizo on the stove over medium high heat and cut each into 4 pieces (12 pieces total). Grate the manchego. For some reason I decided to use a vegetable peeler. It didn’t go well for the peeler. Don’t worry, you’ve got 45+ minutes to do all this, and it doesn’t matter if the chorizo gets cool again once it’s cooked. 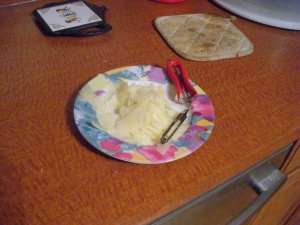 When the sauce is the consistency you want, remove it from the heat. Fish out the onion halves and chop one of them into medium sized bits. Grease a cupcake pan. Lay lasagna noodles in an X over one of the cupcake spaces, press it into the depression, and fill with a chorizo piece and a bit of onion, a few peas, and some manchego. 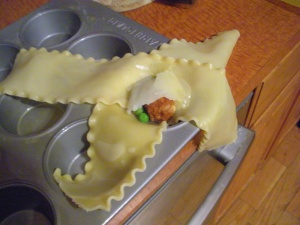 Spoon in enough of the tomato sauce to cover everything, and then fold the noodle that was on top in you X over to cover the filling, cutting off excess with kitchen shears. Fold the outer noodle on top, again cutting off excess. Hold shut with one of your pre-soaked toothpicks. 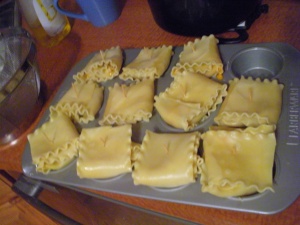 Spoon additional sauce over the top of the cupcakes. I finished off my sauce doing this. Bake for twenty minutes, and then sprinkle on the rest of your cheese before baking 5 more minutes. 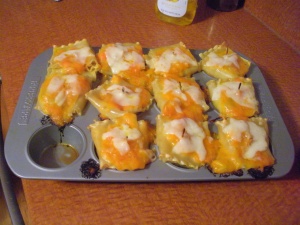 Remove from the pan and enjoy!

I liked these a lot. They look fun, don’t make a mess to eat, and are delicious. Two would be a pretty good dinner, three if you’re really hungry. I think they’d be a fun food to have at a party. And, of course, you can fill them with anything else you like – just veggies, meatballs, whatever else strikes your fancy!

If using fresh tomatoes, freeze for several hours until hard, then defrost and slip the skin off in warm water.

Put 12 toothpicks in a glass of water to soak, and peas in a dish to defrost.

Roughly chop the tomatoes and put in a saucepan. Cut the onion in half and peel. Add to the pot, along with butter and salt. Bring to a low simmer and cook for 45 minutes, or until desired thickness. Taste, and add additional salt if necessary.

While tomatoes cook, grate cheese, cook chorizo on medium high heat on the stove, and boil lasagna noodles according to package directions. Slice the 3 chorizo sausages into 4 pieces each.

When the sauce is finished, remove the onion halves and roughly chop one of the halves. Preheat the oven to 350 degrees.

Grease cupcake tin, and lay two lasagna noodles in an X in one of the depressions. Fill with one piece of chorizo, several peas, a few bits of onion, and some cheese. Spoon in enough tomato sauce to cover the filling. Fold the ends of the inner noodle over to close, cutting off excess with kitchen shears. Fold the outer noodle over, again cutting off excess, and hold closed with a toothpick. Spoon remaining tomato sauce over the closed noodles.

Repeat 11 more times to fill pan. Bake at 350 for 20 minutes. After 20 minutes, sprinkle remaining cheese over the cupcakes and bake a further 5 minutes.

My name's Corinne, and I like cake, cookies, and chocolate! Also, non-c-things such as ponies, Star Trek, and biking. I write a food blog and a blog about life, wide open spaces, and museum work. Nice to meet you!
View all posts by sparecake →
This entry was posted in Dinner, Party! and tagged Chorizo, Cupcakes, lasagna, Manchego. Bookmark the permalink.