Seeking inspiration/guidance on what the heck a shuttle is shaped like.

My friend Anna recently gave me The Gourmet Cookie Book: The Single Best Recipe from Each Year 1941-2009. So far I’ve only made one recipe from it, and I’ve made it twice. Not because it was SO GOOD, although they did disappear immediately both times, but because it was really clear the first time that there was room for improvement. The second time they still weren’t perfect, but at this point I’m not sure how to fix it, and they really are tasty, so I’ll leave it to all 3 of you out there reading this to snack on and see if you can improve.

There is an awful good chance you have all of these things already.

The dough ingredients are pretty much thrown in a bowl and kneaded, and then refrigerated for 2 hours. When I followed the recipe exactly, the dough was super dry.

You put this in the fridge for 2 hours, so I was willing to believe it would stick together better after. It was semi-successful?

You then shape it into…blobs, basically. Theoretically they’re shaped like shuttles, but shuttles in the sense of weaving shuttles, not space shuttles. Those shuttles are dipped into egg white and then rolled in sugar.

Even the book basically has blobs. 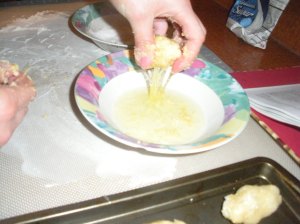 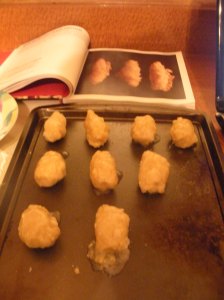 There's a lot of excess egg white around here, which I definitely tasted after.

The finished product, which was dry and eggy, yet still sweet and rapidly eaten.

In the second batch, a few days later, I added a bit of water to the dough (there wasn’t any in the original recipe), and it held together much better. 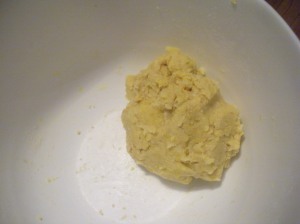 No longer just a powder.

I also added water to the egg white and beat it quite a bit to make sure it wouldn’t be stringy, so that you’d get a lot less, just enough to hold on the sugar and no more.

It may not look it there, but there was actually a ton less egg on the outside, and finally the sort of crisp sugar crust the picture in the book seemed to have. The water in the dough also made it a nicer texture, and the softer dough ended up tasting more buttery (a plus).

You can sorta see that there's a little sugary crust. Yes please!

At this point, I think the taste is dead on, but they are fairly ugly cookies. The picture in the book makes it look like there’s a flaky, almost fried looking, crust. I’m not sure how to achieve that with this recipe, but might try again some time in the future.

Sift the flour, sugar, and salt into a bowl. Add the butter, egg yolks, vanilla and water, and knead until the dough is well blended. Chill in the refrigerator for 2 hours.

Preheat oven to 350 F. Divide dough into walnut sized portions and roll with the palm of the hand on a lightly floured board to give it the shape of a small sewing machine shuttle. (Approx. 2 1/2 inches long and 1/2 inch thick.) Mix the spare egg whites with 2 tablespoons of water and beat until it’s no longer stringy. Dip each cookie in the egg mixture and roll in sugar. Bake on a lightly buttered baking sheet for about 8 minutes, or until lightly browned. (Mine never got all that browned, even after several extra minutes. I eventually just took them out because they felt cooked to the touch.)

My name's Corinne, and I like cake, cookies, and chocolate! Also, non-c-things such as ponies, Star Trek, and biking. I write a food blog and a blog about life, wide open spaces, and museum work. Nice to meet you!
View all posts by sparecake →
This entry was posted in Dessert and tagged Cookies, Dessert. Bookmark the permalink.